WordDive organises a Finnish course for immigrants together with the city of Hämeenlinna. In the beginning of the course, basics such as introducing oneself and making appointments were taught. The next step is Finnish verb conjugation in the present tense with WordDive’s new grammar course.

“WordDive works well for immigrants because it is possible to study effectively at home, even before arriving in the new country. The programme supports contact teaching well but also works independently, especially for students who already possess language learning skills”, says Meri Luttinen, Finnish as a second language teacher. 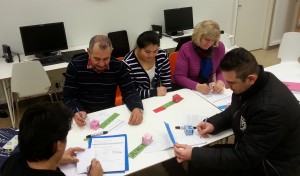 The course started in the end of November, and the eight students come from Iraq, Afghanistan, Russia, Estonia and Myanmar. There are three classes every week, 90 minutes at a time. In addition, the students study with WordDive six hours a week.

“Some of them have gotten carried away and done considerably more than expected. One of the students spent 11 hours learning with WordDive in one week”, explains Luttinen.

The teacher’s time can be used more efficiently in class

Luttinen continues that using WordDive has definitely been an advantage in several ways. For example, the teacher can focus on higher level topics in the class because study items do not need to be repeated until everyone knows them perfectly. Instead, students can repeat them at home with WordDive as much as they need to.

“While teaching, I intend to concentrate on the wider contexts of the language, and not, for example, on filling in blanks. WordDive helps understand the pronunciation and spelling system of the language, because the programme always gives a spoken example and does not accept wrong answers. Repeating the example aloud is the best way to learn”, concludes Luttinen. According to her, WordDive has also been exceptionally useful in learning the vocabulary.

“Even without a common language, basic vocabulary can be easily learned through pictures. Usually, elementary courses for immigrants are challenging because the words cannot be explained but they have to be shown. With WordDive, the students’ vocabulary increases rapidly and thus enables communication.”

Learning languages is like a gym for your brain

Why are pictures so effective in language learning?