Eetu Laamanen, holder of multiple Finnish Championships in judo, has decided to take on a new challenge. He’s going to start studying in France to become a judo instructor. 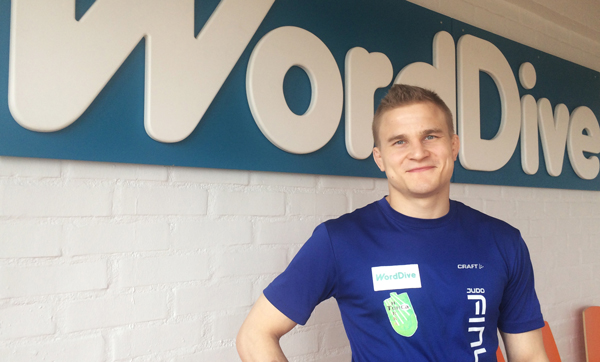 “Last year, I started planning a move to Paris to train and to study for a judo instructor’s degree. France is a major judo country and they have a lot of know-how. I know I’ll get good practice there and also be able to develop as an instructor.”

France is already a familiar country to Laamanen, as he has been there many times before to train. The French language, on the other hand, is quite unfamiliar to him. That’s why Laamanen decided to start studying French with WordDive. The judo instructor’s degree is taught in French, so he will need to learn at least the basics of the language.

“It’s a level one instructor’s degree, so they teach judo basics that I have already mastered. But of course language is a big part of it, so I need to know at least enough to successfully complete my studies.”

Laamanen has set himself a goal: to be able to speak a little French by the end of this year. He wants to be even better by the time he graduates. WordDive’s French courses have given him a good start, and his language skills will surely improve with everyday life in France. He’s already looking forward to his instructor studies.

“In judo, the names of the techniques are in Japanese, so that bridges the gap. It makes studying and teaching in France a bit easier.”

Mobile language studies and a busy traveller are a great match

Laamanen started WordDive’s French courses last autumn and has now completed all of them. He plans to repeat some of the courses during the summer and to practise speaking French with his friends. He has found a good routine for language learning.

“I’ve tried to further my studies daily so that the language would be around all the time and I wouldn’t have breaks that last over a week. Last autumn I competed in Paris and earlier this year in the French-speaking region of Belgium, so I could hear and read French there. Travelling is always good for language learning.”

Practising French with the mobile app was a positive surprise for Laamanen and turned out to be a good learning solution for him.

“The mobile app was a new environment for me because I haven’t played mobile games that much. But every time I have even a short break – for example, at an airport when I’m travelling because of judo – I’ll concentrate on exercising for a while. The internet is available almost anywhere nowadays. And since the cell phone is always around, it’s easy to grab it and continue learning where you left off.”

Aside from the main goal, the smaller milestones keep Laamanen’s study motivation high.

All in all, learning French has been rewarding for Laamanen, and mobile exercises have suited the travelling athlete well.

“I can recommend the mobile version to everyone. It’s addictive and educational at the same time, and you can see for yourself how easily you can learn. It’s easy to start or to revise prior language studies.”

WordDive wishes Laamanen all the best with his judo studies!

How to find time for language studies

Aino: I want to reach the top!

Learn how to use the passive voice in Swedish!